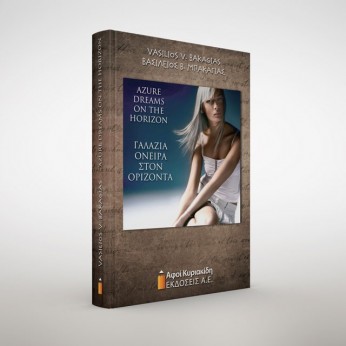 V. Bakagias was born in Brunswick, in the state of Georgia. He has a love of books which inspired him to seek out wise and learned individuals who would put him on the path to unchartered realms of the mind and beyond. He was lead to find the works of such notable greats as Ken. Anger, W. Burroughs, Y. Mishima, R. Bly, and many others who have shaped the way Vasilios views the world at large.

Vasilios Bakagias is a man who has been seeking his dream since the time he gained sentience at a very early age. He was born in the coastal town of Brunswick, located in the state of Georgia, and has had a love of books which inspired him to seek out wise and learned individuals who would put him on the path to unchartered realms of the mind and beyond, and who would also introduce him to the works of such notable greats as Kenneth Anger, William Burroughs, Yukio Mishima, Robert Bly, and a host of others who have shaped the way Vasilios views the world at large, and to which he owes a huge debt of gratitude and thanks.

Vasilios started his poetic aspirations at a late age, and his particular take on poetry is the love and adoration of beautiful women from all around the world. He is not involved in any mainstream religions, but is dedicated to the ideal of the Eternal Feminine, that ethereal goddess which resides in the hearts and minds of the most beautiful and enchanting of Nature's creations, and whose names resonate throughout recorded history:

Ishtar, Astarte, Hekate, Lilith, Aphrodite, Feyja, Isis, Sekhmet, Kali Ma, Nuit, and Babalon, but to name a few. This book will be a testament of Vasilios' dedication to his beloved goddess, and in the years to come, a signpost to mark the path of which he is on now.

A romantic ode to love

Breath-taking, bewitching selection of poems that eloquently describe the inspiration that love brings and all the profoundly deep feelings that rise with it. Could be mildly compared to 'Fleur du Mal' by Baudelaire. This book is truly underrated.

The poet inspired by love and lust writes those beautiful and deeply emotional poems. Through those lines I wandered in distant places and beyond. I travelled alongside him to a journey of self-discovery. Congratulations to that remarkable person that I have the honour to call friend! As for the book I reccomend you to buy it without a doubt.

One of the most beautiful modern poetry books you should have on your bookshelf! A huge thank you for signing my book!

I am very amazed by the clarity and depth of this writer, his poetry being a testimony of love and lust, and what it means to be inspired by women from mythology and his adoration of the Eternal Feminine. I give it five stars for being such an excellent work of the heart.

The most complete piece of art

Wow! The most complete piece of art I have ever read. In the beginning I thought it would be boring, but then a pleasant surprise hit me. I kept reading … and reading… Can’t wait for part 2 to be released. I highly recommend the book for anyone interested in romantic & sensual poetry presented from a different and unique perspective. Any reader will be surprised as I was. Thank you Vasilios! Keep up the good work!

Four stars for this ode to all things feminine. The strong use of language by this (male) author evokes powerful images of wonderment, love and lust. Hard to believe this is a first-time author. I look forward to his future writings.

Here’s the review, sorry it took so long.

Azure Dreams On the Horizon
Me and Vasili go back almost thirty years when he was a shy young man. There was always something remarkable about him then. He was what Robert Anton Wilson would call God Intoxicated. He was the sublime explorer. Anyway life moved on and we lost touch.
Recently I heard he had released a book of poetry. On receiving a copy I wondered if my old friend was going for love or romantic poetry. Then I read the book and was taken aback by the shear lyrical audacity of the one time young man who had made it through life to become middle aged and had a vision of the true nature of the Goddess. Oh, the peans of wisdom as he extolls the rapture of Babalon and sang the praises of the earthly and the heavenly.
It became clear that Vasili’s universe makes no distinction between the heavenly woman and the earthly. The Goddess resides in all women. For they are all holy.
It’s bilingual so if you speak Greek and English you will be in for a double treat.
This is not mere love poetry. This is a work of true inspiration.
Savor it and enjoy it as much as I did.

Azure dreams on the horizon.

azure dreams on the horizon

30 other products in the same category: